Closer to the original topic. If you saw my posts at the beginning of the topic, I was younger and living under a rock. I've crawled a little ways from there. You probably already know this, but the Church of Satan is actually agnostic/atheist in it's beliefs. They don't worship Satan, they use him as a symbol. I didn't know that as a naive kid.

Here is the site.

http://www.churchofsatan.com/
Halloween wraps fear in innocence,
As though it were a slightly sour sweet.
Let terror, then, be turned into a treat...
~Nicholas Gordon
Top

That's what they claim, but there are those who actualy do worship satan. Atheism is colser to the mark, though. Agnosticism doesn't have any cymbol. Many agnostics actualy acknowledge that there could be a 'god,' and that something or some one had to start everything. "The un moved mover." But they question whether or not that un moved mover realy cares about us or not. Atheists are more ademant in their dis belief, and the branch of the Church of Satan you mention uses the figure of satan as a figure head.

A lot of atheists actually do accept the possibility of a creator, they just think it's very unlikely.
Halloween wraps fear in innocence,
As though it were a slightly sour sweet.
Let terror, then, be turned into a treat...
~Nicholas Gordon
Top

We do have a few churches for Satan worshippers here in Dumfries for long, long time. Right now, all are GONE!!! Some people disappeared and somebody torn down the chuch building. 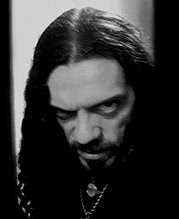 RisingDeadMan, many who claim to be atheist are actualy agnostic. A die-hard atheist believs that there is no god what so ever. They do not waiver on that belief, and anyone who prays it taliking to themselvs. That's according to what many true atheists are saying. Athiests believe in nothing but what man can do. An agnostic believes in the "unmoved mover" to a limited extent. Many believe that there has to be something that started everything, while others say that there is a chance there is a creator, but it's unlikely. My two brothers are like that. My brother Barry believes that there has to be a creator of some sort, but he does not believe in any organized religion. My brother Bob believes that maybe there is a creator, maybe there isnt, but if there isn't, that creator does not care about us one iota.

That's the basic difference between agnostic and atheist.

I have heard ministers say that it is easier to convert an atheist than an agnostic. Many atheists are really seekers for truth. They have not been convinced by their reason that there is a God, and the presence of evil in the world makes it hard for them to accept the idea of a loving, personal God. But they tend to be thinkers. Agnostics are more "lukewarm" on the subject.
Top

My opinion on that, if you go with the logic that there must be a creator because the universe could not have come from nothing then who created God? By that logic he must have come from somewhere. If you go with the idea that he could just have always existed than why cant the universe have just existed without a creator?
Halloween wraps fear in innocence,
As though it were a slightly sour sweet.
Let terror, then, be turned into a treat...
~Nicholas Gordon
Top

Time and space are one and the same. Maybe some time, a brazillion years in the future, the human race merges into one singular consciousness, rips a hole in time, and goes back and creates the Earth and all living creatures on it. Or we go back in time an ignite the explosion that created the universe... if you swing that way. Possibilities are endless.
Top

I think the human race is an alien experiment, placed here to evolve and be studied by a superior race who lends a hand once in a while.
http://theyard.netii.net/
"You can catch more flies with honey than vinegar but if you pull their wings off they'll eat whatever you give them!"
Top

I used to be atheist but then I was agnostic and now I believe because I stop fighting against open mind.
Ã¦Ë†â€˜Ã¦Æ’Â³Ã¥Â¿ÂµÃ¦Ë†â€˜Ã§Å¡â€žÃ¥Â®Â¶
Top

Murf, agnostics believe in the 'unmoved mover,' but the reason why it's so hard to "convert" them is because they see their views as THE truth. So do many atheists, but as various others pointed out, a lot of atheists are also trugh seekers.

Pumpkin56, according to most theolgins, including those of the Catholic Church, God had no beginning and no end. God allways was and allways will be. He's the "unmoved mover" spoken of by St. Thomas Aquinas.

And no, I am not trying to convert anyone, I am just stating what is taught by most mono theist religions.

http://www.youtube.com/user/theamazinga ... end=1&ob=4
Halloween wraps fear in innocence,
As though it were a slightly sour sweet.
Let terror, then, be turned into a treat...
~Nicholas Gordon
Top

Well, that was kind of a long YouTube (14 minutes), but I watched it all because it interested me. I had never heard of that (college kid?) who has tried to separate Jesus from religion. I don't really buy his premise, either. Jesus says (Matthew 5:17) that He didn't come to abolish the Law & the Prophets, but to fulfill them. To me that says that He was very much within the framework of Judaism (the reason I have never understood anti-Semitism among Christians). He wasn't anti-religion, as I understand Him. He was anti- the perversion of religion. He was very, very severe against the Pharisees, who were quite self-righteous, and we have that mentality with us always.

I also can't go along with everything the "Amazing Atheist" says, either, obviously. Like so many people I have known throughout my life, he seems to equate religion, and even the idea of sin, with enforcing or breaking a bunch of rules laid down in the Bible. When people do that, I wonder if they have ever really read the Bible, or read it attentively. Rules and rule-breaking were what the Pharisees were all about. Sin is not about rule-breaking. It is about separation from God. My favorite comment about the Ten Commandments was made years ago by Billy Graham. He said that we do not break God's commandments. We break ourselves upon them. I am not a Baptist and do not regard Billy Graham as my ultimate authority in religious matters, but that was a very wise and insightful statement about human nature. The Bible is not just a collection of "old desert stories." It is a collection of intensely human stories, about the way we break ourselves, over and over again, and seek reconciliation with God because of it.

Clearly, too, the Amazing Atheist is bugged by the idea that a man who lived two thousand years ago could atone for my sins today. I think he is trapped in the notion that God is time-bound. But God is outside of time. That does not mean He lives "forever," if by forever you understand "endless time." That means He is outside of time. I think the concept of eternity is not really comprehensible to the human mind, because our minds are time-bound instruments. But again and again the Bible uses words that suggest this dichotomy. Even the name God gives Moses, "I Am," underscores His timelessness.

I don't know what that college kid says about the Old Testament versus the New Testament. The Amazing Atheist says he (the college kid) rejects the OT and holds up the NT. I know there are some denominations that tend to do that, but to me, the Bible is continuous. I love the Old Testament. It is filled with wonderful story after wonderful story. Many literary scholars have remarked that every genre of literature there is can be found in the Bible. How could anyone who has read it not love it? And the funny thing is, the more you read the entire Bible, the more you see Jesus everywhere in it, not just in the New Testament. He is all over Psalms, for example. (BTW, He actually quoted Psalm 22 on the Cross, which, if you read it, is a pretty graphic description of the Crucifixion).

Sorry, I know I am going on. I don't mean to be confrontational, not at all. But it makes me sad that so many people today seem ready to reject the Bible and Christianity without really even understanding either of them.
Top

That was a great post, Murf. You didn't "ramble on" at all. Every word of your post was right to the point and right on target. The Bitle is not just a book of "Thou Shalts" and "Thou shalt nots." It's a wonderful series of stories that are as relevant in the 21st century as they were at the time they were written. The Bitle, truely is the Devinly Inspired Word of God. By the way, the word "Bible" comes frm the Latin word Bibliotek, which means "Library." The Holy Bible is not just a collection of stories. IT's a whole collection of books. Books that are very relevant to how we live today.